The Creative Diversity Network Diversity Awards are held every two years to reward outstanding quality, creativity and diversity in television that represents all aspects of British society. The award categories are designed to acknowledge outstanding work both on and offscreen and serve to showcase exciting breakthrough talent.

The Creative Diversity Network (CDN) today announced the winners of its 2019 UK Television Diversity Awards. The awards are held every two years to reward outstanding quality, creativity and diversity in television that represents all aspects of British society. The 2019 awards ceremony took place on Wednesday 9 October at The Ham Yard Hotel, London

Through these awards, CDN recognises industry stakeholders who are leading the way in driving change across broadcasting around all aspects of our diverse society covering age, body image, disability, ethnicity, faith, gender, gender identity, regionality, sexuality and social class.

Deborah Williams, CDN Executive Director said: “I’d like to congratulate all the winners of the 2019 UK Television Diversity awards as well as those nominated. The strength of this year’s entries is a testament to our industry’s ability to create engaging, powerful content on screen and take positive action behind the scenes to help drive diversity across UK television.”

Production Company of the Year

Broadcaster of the Year

Uber Ally
An award for outstanding support of the Creative Diversity Network and its agenda.

Outstanding Contribution
An award for an outward facing leader who has foregrounded diversity.

Notes to editors: Nominations for some awards categories were limited in number.

Broadcaster of the Year

The awards ceremony will be held in London on Wednesday 9th October 2019. 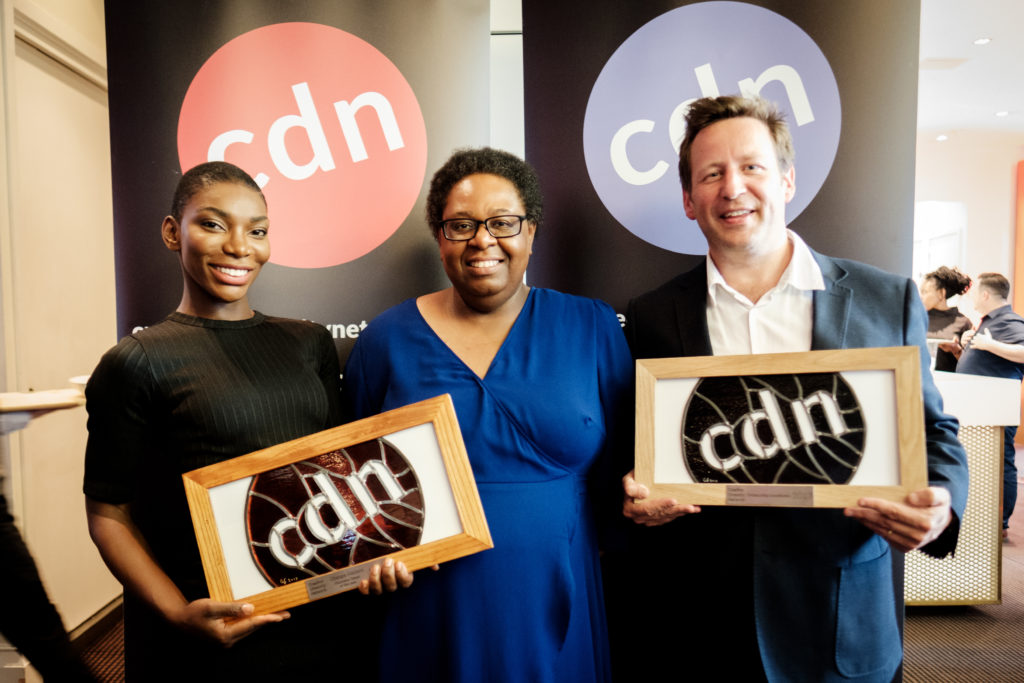 The Creative Diversity Network (CDN) today revealed the winners for its 2017 awards. The awards reward outstanding quality, creativity and diversity in television that represents all aspects of British society.They are designed to acknowledge outstanding work both on and off-screen and serve to showcase the best and most exciting talent in the UK.

The winning programmes all demonstrate that challenging stereotypes can be thought-provoking, offers a chance for under-represented groups to tell their own stories, as well as being entertaining. Those individuals, production companies and channels winning the Change Makers awards were all chosen for widening the understanding of diversity and championing culture change across the television industry.

The award for Outstanding Contribution to increasing diversity in the UK’s television industry was given to the Rt Hon Ed Vaizey MP, former Minister for Culture, Communications and Creative Industries. CDN felt that when concerns about diversity were brought to his attention, he made fantastic use of his power to convene and lead the diversity agenda within the Department of Culture, Media and Sport, which helped to ensure that this year’s award winners were supported.

Deborah Williams, CDN Executive Director said: ‘The winners of our 2017 awards shone through what was a strong field. They are proof that there is a lot of fantastic talent out there and when producers and broadcasters set their mind to it, they really can make and champion great, memorable content that engages with a wide audience and properly reflects the diversity of all of their viewers. If Ed Vaizey gets it, everyone should get it!’

The Winning programmes in the Outstanding Programme shortlist are:

Life and Deaf (Flashing Lights and CTVC for BBC 4)

The Change Makers winners are:

Production company of the year

Commissioner or Channel Of The Year